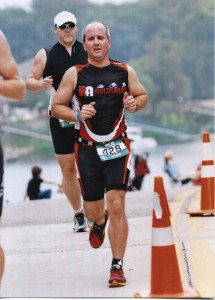 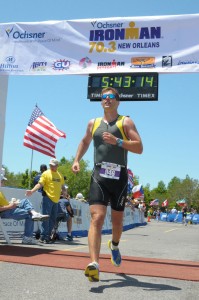 BAY ST. LOUIS Ronnie Artigues and Joel Lawhead are headed to Panama City Beach this week to compete in the storied Ironman Florida competition on Saturday.

The event, considered the longest and toughest single-day race, begins with a 2.4-mile swim in the Gulf of Mexico, followed by a 112-mile bike ride and ends with a 26.6 mile run. “It’s a doozy,” Joel said.

Ronnie is an attorney with Butler Snow and Joel is the Chief Information Officer at NVision Solutions Inc.

The two have been training and competing in events over the last couple of years and have done some training together in preparation for the Florida Ironman. On a recent Sunday they biked 100 miles and ran for 5. Last year they volunteered to work the triathlon to get a first-hand look, from the early morning start to the late-night finish line party.

Joel, 38, has been a runner since he was a kid. His first taste of competition was in a local mini-triathlon in 2003. In 2011 he got serious about becoming a triathlete. In the Mississippi 50 Ultra Marathon in March, he finished in 10 hours and 39 minutes.

Ronnie, 46, started running two years ago for health reasons but he got bored with just running, so he branched out into triathlons. He recently completed the Ironman Augusta, his longest event. That’s a 70.3 mile triathlon.

They approach training with their own styles. Joel makes sure he’s done 80 percent of the distance before a race. “It gives me the confidence to do it. I’m not going to win but I’ll always be able to finish.”

Ronnie takes things literally. “The only way to mentally prepare is by physically doing it in training, by putting the miles in, knowing you can physically do it when you get there.” He said there’s no way to prepare for sitting on a bike seat for six hours “other than just doing that.”

You can cheer Ronnie and Joel on as you watch the race at www.ironman.com/

2 thoughts on “Artigues, Lawhead competing in Florida Ironman this weekend”